Today’s organizations face unprecedented security challenges. The sophistication and volume of attacks is increasing exponentially, often resulting in lost company, personal and customer data; stolen intellectual property; damaged reputations; and lost productivity. At the same time, security has become more complex. Organizations are grappling with the BYOD revolution and the explosion of personal devices connecting to the network. Personal smartphones and tablets slow network performance and productivity, and mobile applications such as social media and video streaming consume an enormous amount of bandwidth. In order to address these network security and productivity challenges, some organizations have chosen to compromise their security by turning off features to maintain network performance.

Now your organization can be both secure and productive without compromising network performance. The Dell™ SonicWALL™ Network Security Appliance (NSA) Series next-generation firewalls (NGFWs) deliver network security that does not compromise performance. It delivers world-class security and performance without compromise, using the same architecture as the flagship SuperMassive next-generation firewall line. At the same time, the NSA Series offers Dell’s acclaimed ease of use and high value.

At the same time, the NSA series offers Dell’s acclaimed ease of use and high value. Based on years of research and development, the NSA Series is designed from the ground up for distributed enterprises, small- to medium-sized businesses, branch offices, school campuses and government agencies. It combines a revolutionary multi-core architecture with a patented*, Reassembly-Free Deep Packet Inspection® (RFDPI) single-pass threatprevention engine in a massively scalable design. This gives organizations industryleading protection, performance and scalability with a high number of concurrent connections, low latency and high connections-per-second with no file size limitations. Highly respected independent third-party testing firms have evaluated and/or certified the technology of the NSA Series firewalls.

In addition, NSA Series firewalls feature network-based malware protection with cloud assist to provide organizations with an essential, primary layer of defense against millions of variants of malware.

NSA Series firewalls are also easy to administer and cost-effective because they support Dell’s award-winning Global Management System platform that is capable of managing hundreds or even thousands of Dell SonicWALL firewalls from a single pane-of-glass console. Comprehensive real-time visualization shows what is happening on the network with thorough, on-box and off-box reporting.

Dell SonicWALL NSA Series firewalls are capable of providing organizations of any size with a deeper level of network security because they are designed using a scalable, multi-core hardware architecture and a patented, single-pass, low-latency, Reassembly-Free Deep Packet Inspection® (RFDPI) engine that can scan every byte of every packet while maintaining high performance. The Dell SonicWALL NSA Series goes deeper than other firewalls with an RFDPI engine that combines real-time SSL decryption and inspection, an intrusion prevention system (IPS) that features sophisticated anti-evasion technology and a network-based malware protection system that leverages the power of the cloud. Now organizations can block daily new threats as they appear.

It is estimated that organizations are blind to approximately one third of their network traffic due to SSL encryption. SSL Decryption and Inspection technology available on the Dell SonicWALL NSA Series enables the RFDPI engine to decrypt and inspect all of network traffic on every port.

Every hour new variants of malware are developed. The Dell SonicWALL NSA Series keeps you abreast of these threats with network-based malware protection that leverages a cloud database which is updated continually and currently contains more than 13 million variants of malware.

The Dell SonicWALL Intrusion Prevention Service (IPS) protects against an array of network-based application vulnerabilities and exploits. New application vulnerabilities are discovered every day making ongoing IPS updates critical in keeping protection up to date from emerging threats. Dell SonicWALL goes a step beyond traditional solutions with an intrusion prevention system that features sophisticated anti-evasion technology. It scans all network traffic for worms, Trojans, software vulnerabilities, backdoor exploits, and other types of malicious attacks. Cybercriminals often try to circumvent the IPS by using complex algorithms to evade detection. Dell NGFWs feature advanced threat protection to decode hidden attacks before they can harm your organization. By focusing on known malicious traffic, Dell SonicWALL IPS filters out false positives while increasing network reliability and performance. Designed to protect against both internal and external threats, Dell SonicWALL IPS monitors network traffic for malicious or anomalous behavior, then blocks or logs traffic based on predefined policy.

Once a packet undergoes the necessary pre-processing, including SSL decryption, it is analyzed against a single, proprietary memory representation of three signature databases: intrusion attacks, malware and applications. The connection state is then advanced to represent the position of the stream relative to these databases until it encounters a state of attack, or other “match” event, at which point a pre-set action is taken.

In most cases, the connection is terminated and proper logging and notification events are created. However, the engine can also be configured for inspection only or, in case of application detection, to provide Layer 7 bandwidth management services for the remainder of the application stream as soon as the application is identified. 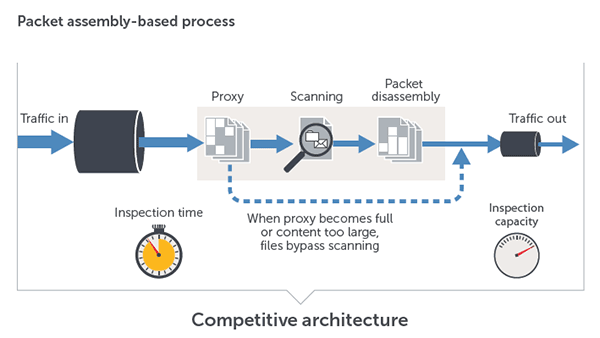 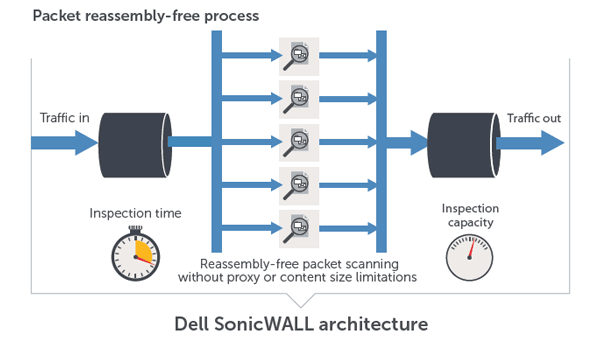 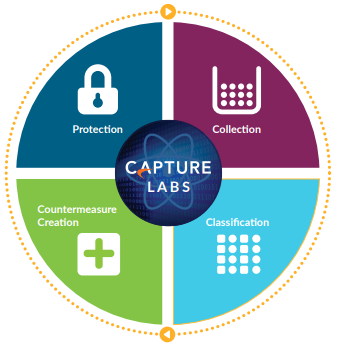 The dedicated, in-house Dell SonicWALL Threat Research Team works on researching and developing countermeasures to deploy to the firewalls in the field for up-to-date protection. The team leverages more than one million sensors across the globe for malware samples, and for telemetry feedback on the latest threat information, which in turn is fed into the intrusion prevention, anti-malware and application detection capabilities.

Dell SonicWALL NGFW customers benefit from continuously updated threat protection around the clock, with new updates taking effect immediately without reboots or interruptions. The signatures resident on the appliances are designed to protect against wide classes of attacks, covering tens of thousands of individual threats with a single signature.

In addition to the countermeasures on the appliance, NSA appliances also have access to the Dell SonicWALL CloudAV Service, which extends the onboard signature intelligence with more than twelve million signatures. This CloudAV database is accessed via a proprietary, light-weight protocol by the firewall to augment the inspection done on the appliance. With Geo-IP and botnet filtering capabilities, Dell SonicWALL NGFWs are able to block traffic from dangerous domains or entire geographies in order to reduce the risk profile of the network. 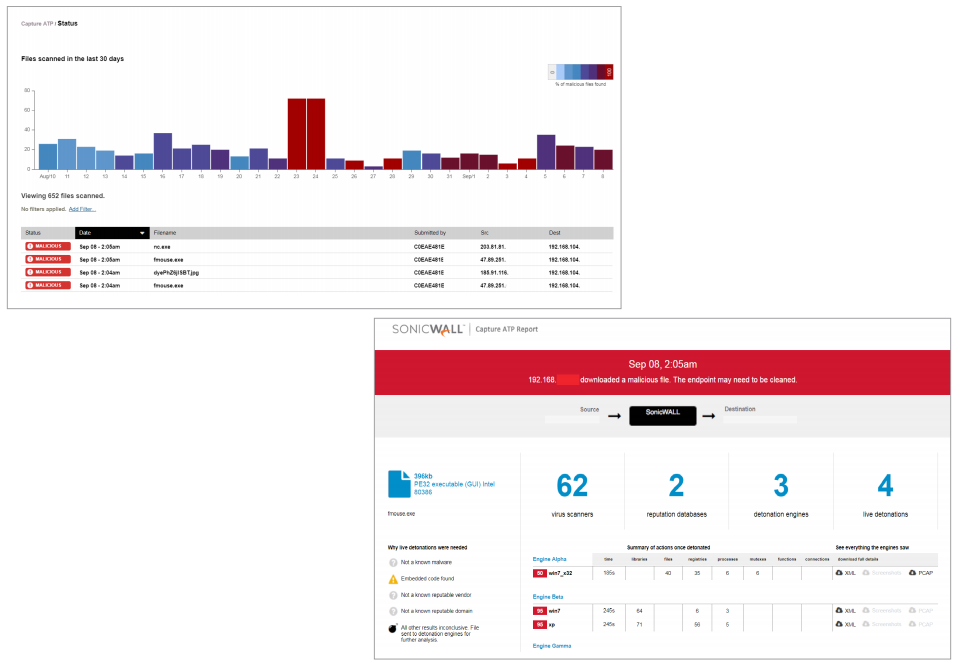